So, I get this little magazine called Prevention. Magazines, as a rule, do not represent or support the lifestyle that I and my family live. However, I still get a little thrill when I get one in the mail. I especially like magazines with recipes. And Prevention has recipes that I can make in a reasonable amount of time and not feel guilty about serving to my family. In the April 2014 edition there was a section on breakfast. I love breakfast and healthy breakfast is even better! I found a gem. They call it “A Better Croque Madame” and I made it even better by making it dairy-free. The only thing is it takes about half an hour to make and that doesn’t really work for my morning schedule. But this sammie is great for breakfast, lunch or dinner. Or better yet a lazy Saturday (I’m sure there are people in the world who have those). In my dairy days I loved grilled ham and cheese. I did not know that I should have been calling them Croque Monsieur sandwiches (I try to avoid any French as I have a horrible accent and there always seems to be too many letters). In Brazil I ate grilled ham and cheese sandwiches with fried eggs in them. The eggs were cooked hard so you could pick up the sandwich. I also had a pizza topped with ham and fried eggs (not my favorite). Now this little sandwich is like restaurant food. I am not a sandwich person, but a grilled sandwich topped with a fried egg? That’s just good. I ate one yesterday and now after writing this I want another! I have already lost count of how many I have eaten this since I got the magazine, I might have a Croque Madame problem.

View this document on Scribd 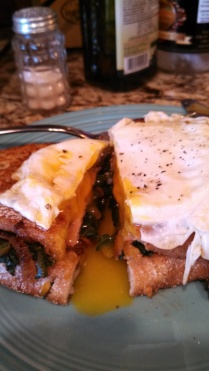 I am excited to have this recipe written down so I can recycle the magazine. I have a little stash of magazines that I have saved for one article or recipe, I have to stop that.

I remember when I was a kid and would ask my mom how long I could go play. One hour? Aw, mom. Then I would run across the street to my best friend’s house and we would play for an hour or whenever my mom told me it was time to come in. We didn’t count calories, we didn’t search for the newest and best workout, we didn’t worry about what we ate (unless it was liver) or how much we ran. Running, jumping and swimming were all just for fun. Spaghetti and tacos were the best and salad was something to be finished so you could have dessert. I didn’t compare my body to my friends and definitely not to anyone on a magazine cover. Then I became a teenager and for some reason everything changed. Exercise became something apart from playing, food became healthy or unhealthy. I liked my flat tummy, but my hips, thighs and butt were too big. I was gorgeous, but I couldn’t see it. Somehow my self-worth got tied up in the way I perceived myself. I blame Disney. After turning 29 several times and having two babies my tummy will not be flat or toned, perhaps ever. But this is the body that God gave me. I have to love it. So, should I give up? Eat whatever I want? Live without an exercise plan? Buy bigger clothes? NO. I can’t. I’m shallow that way.

I always thought that people were lying about feeling better when they work out. It sounds better to say that I feel better and have more energy when I work out than to say I just don’t want to be fat. I really don’t want to have to buy bigger clothes, the fact that I feel better and have more energy is just a plus. The only problem is that I hate exercise. I am not athletic. Reading does not burn calories. Knitting is also not terribly aerobic. I will never be ‘ripped’ or bikini ready, but I am starting to see results with green smoothies and T-Tapp.

I have only been on one ‘diet’. A diet where I counted calories and followed an eating plan. A ‘get ready for summer’ diet in a magazine. I didn’t like it. I did lose weight, but what a hassle! And as soon as the diet was over I was done. I couldn’t live that way. Green smoothies are easy. There are recipes all over the internet. Made from real food, that tastes good and is good for you. Switching from a bowl of cereal to a smoothie was not a difficult change. Now I actually eat the fruit and veg I buy instead of waiting for it to go bad and then tossing it out. This is one little thing that I can do and keep doing.

I have a problem sticking with exercise programs too. I’ll have a specific event I want to lose weight for or my clothes are getting too tight. I’ll find a DVD or a plan in a magazine and work out for a few weeks. Usually I don’t see results in the first week and I get discouraged, I’ll miss a day or two the second week and by then I’m tired of the work out anyway. I want immediate result. However, I have been doing T-Tapp for several months now. Once you learn all the moves it is just 15 minutes. Now, I don’t know how much 15 minutes a day can really do, but it’s better than nothing. And nothing is the alternative. I don’t have a specific date that I am working for or a number on the scale I am trying to reach. I’m just trying to set some healthy patterns. I want green smoothies and T-Tapp to become habitual. This is the way my mornings start. Some people drive 15 minutes to get to a gym, by then I’m already done working out and I’m starting on my green smoothie. I know I will not get a Hollywood body with this plan, but I don’t live in Hollywood. And there have been changes. I will have to buy new pants! I have several pairs of pants that are not wearable, they are just too big. The last time that happened was after having a baby.

I don’t feel like I’m missing part of my life, like I gave up something or I’m doing anything difficult. I’m not looking forward to a time when I give up green smoothies and T-Tapp. I like what I am doing and maybe I can make even more changes. Only nothing to major.

So, last fall I took a picture of chicken pot pie, but never got around to writing down the recipe or posting it.  Big breath.  Here goes.

When I first started making chicken pies, I used a pre-made crust.  Wasn’t I doing enough without having to make a pastry too?  Anyway, once I made the mistake of making pastry for the chicken pie and my husband will not be happy with anything less now.  Whatever, even if I am making this just for myself I will make the pastry.  It’s just better. Good thing I have a KitchenAid. ‘Cause if Julia Child said they were good for making pastry I will not argue! When I started making pastry as a kid, I made it by hand.  I used the recipe in my mom’s checkered cookbook. My pastry was flaky, but it also fell apart and looked like a 2nd grade pottery project. Now I use a machine and I can roll and re-roll my pie crust and it is still tender, flaky and good. Although I still think pastry is tricky and I’m never quite sure how it will turn out. Handmade, KitchenAid made or bought at the store, pastry filled with creamy chicken and vegetables is yummy!

Just speak very loudly and quickly, and state your position with utter conviction, as the French do, and you’ll have a marvelous time! -Julia Child

View this document on Scribd